'Bend' - The Nature Of Change And The Order Of Repetition

A solo exhibition of contemporary sculptures by Kalyan S Rathore

till September 29 at Gallery Manora, Bangalore 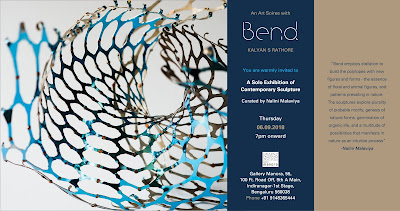 The preciseness of mathematical rules, the natural order in nature and the variants that occur during repetition, lie at the core of Kalyan Rathore’s art making. His sculptural installations derive inspiration from form, structure, space and aesthetics that occur in nature - as an innate incidence. Rathore explores elements of design, formation and spatial arrangement as observed in nature and their underlying patterns of morphology to recreate them in his sculptures.


Rathore has been working as an industrial designer and has conceptualised and created several large scale installations, which have been based on mathematical algorithms, and employ multimedia. Applying principles of progressive distortion, he repeats patterns to create motifs that resemble flora, fauna and naturally occurring elements. The sculptural forms appear to grow organically in a sequential manner, mimicking growth and patterns in nature, yet are reduced to a minimalist form that captures the essentials - the essence of the shape, form and motif in a geometric layout. 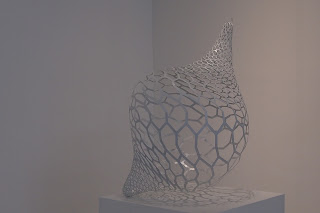 ‘Bend’ explores the variant that alters the mathematical code at the fundamental level, albeit from an artistic perspective, while applying mathematical rules such as the Fibonacci sequence and other relevant formulae responsible for the progression. For instance, the fractal defines a form created by repetitive application of a mathematical rule, where the form does not have to be homogenous, but it is precise. In the event of an error or variation introduced in the rule, the precision gives way to a slight distortion of the form, while retaining its essence, which is close to what is found in nature.

In the current suite of works, ‘Bend’ employs stellation to build the polytopes with new figures and forms - the essence of floral and animal figures, and patterns prevailing in nature. The sculptures explore plurality of probable motifs, genesis of natural forms, germination of organic life, and a multitude of possibilities that manifests in nature as an intuitive process.

(excerpt from the curatorial essay)

Reality is warped. Straight lines are ‘straight’ only under the frame of reference we choose to adhere to. Mass is the summation of energy and Energy is an equally distorted idea too. We are left with no friendly-concepts in science when Quantum-physics walks into the room. The more we explore the more we push the wrinkles of uncertainty around the corner. This is not just a metaphorical position but one that rings true in the scientific communities as well.

‘BEND’ is my ode to the world of distortion. Distortion by design and Design by repetitions. Mutations that are born out of repetition and change. 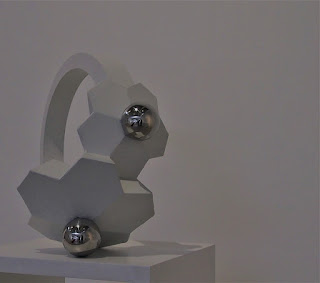 Perhaps the key to chaos is in Order. Can this order be harnessed and explained? The answers may lie in nature. Where nature chooses Geometry as a guiding template to render herself. I seek to find the common elements in every form; from an Atom to the Universe. In flora and fauna this seeming waywardness is apparent. On deeper inspection strict mathematical principles seem to govern the recipe for growth, structure and aesthetics. Geometry it appears is the solution nature turns to in order to negotiate and resolve the need for resources.

The sculptor in me wants to pin down a ‘minimum fundamental form’ that applies itself by replicating and changing at the same time. I present to you my series called BEND; The Nature of change and the order of repetition which is an ongoing exploration of Nature inspired structures.

To contribute articles, please get in touch at nalini.indianart@gmail.com
Also read,
Art News: Grazie Infinite by Shraddha Rathi in Bangalore
Art Mumbai: Written on Water curated by Sanjeev Sonpimpare
Reasons To Visit The 2017 Venice Biennale by Shraddha Rathi
Art and the Question of Authorship and Ownership in the Internet Era by Narendra Raghunath
The 'Reality' of Photo Art Today by Shibu Arakkal
A Tribute to Artist M.B. Patil by H.A. Anil Kumar
Art News: apexart Open Call for Group Exhibitions 2018-19
5 Reasons a Good Catalogue Text is Essential for Your Art
How To Write An Artist Statement
6 Tips On How To Approach An Art Gallery And Find Gallery Representation
Exhibiting Art in Non-Gallery Spaces
Guide To Exhibiting Your Artworks
How to Create an Online Presence