Ode To Nature - A Solo Exhibition By Shirley Mathew 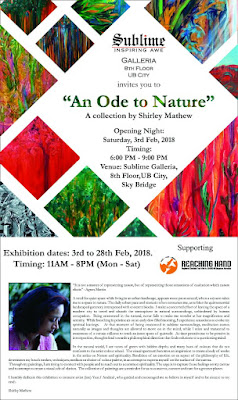 Conceived while sitting in front of a Buddhist temple in Bylekoppe, Coorg, Shirley Mathew's latest suite of works delve deep into the interconnectedness between nature and spirituality and translate them onto canvas. The outcome is a beautiful series that is a celebration in brilliant colours.

Shirley Mathew, a graduate in Psychology (Hons), Jesus and Mary College, Delhi, was initially interested in the nuances of drama and theatre in school and college. She has acted in plays and directed skits from a young age. All along she dabbled in art and later enrolled for intensive study in art at the Corcoran College of Art and Design in the US. She further trained in Barcelona, Spain at the Escola Llotja, the institution where Picasso studied in his early years and his father had taught. This was followed by a short residency at the Garhi Studios of Lalit Kala Akademi, Delhi that was enriching as an artist.  She later trained in Tuscany, Italy and learned new techniques to hone her talent that has led to another dimension in her creativity. 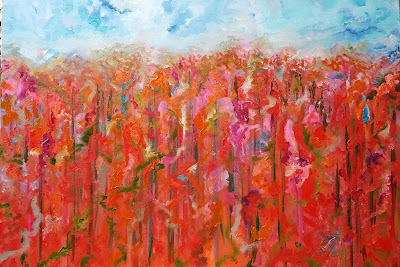 Shirley has represented Karnataka at the Art Fusion Show, Mumbai, to commemorate the Golden Jubilee of Statehood of Maharastra.  A finalist in a National Art Competition, she has participated in more than 50 shows that include several solo shows in prestigious galleries of Bengaluru. She has made a presence in the genre of Abstract Expressionism and has displayed her works in 10 cities of India. Her interest to learn other art forms led to completing courses in Madhubani Painting and Basic paper making conducted by well known artists in the respective fields. 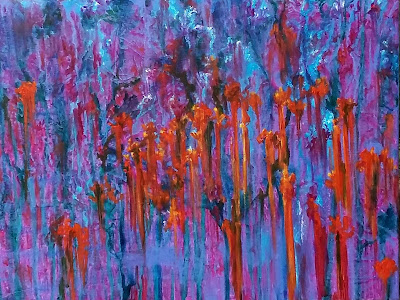 Working mostly with mixed medium, Shirley allows the subject to rule the choice of palette and techniques. Her philosophy is to touch as many lives positively with her creativity and has been conducting art awareness shows for many years in her studio. Shirley has conducted workshops for underprivileged children to raise funds and with professionals in the corporate world to introduce art as therapy.

Her works are in the collection of private homes and Corporate Houses in India, Bahrain, Singapore, USA, Australia, UK and France. She lives and works in Bengaluru.