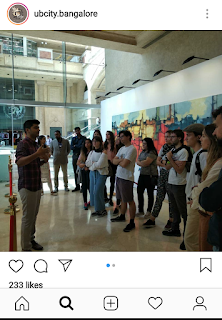 Art News: ‘Art Bengaluru’ is back with its 8th Edition

‘Art Bengaluru 2018'– Bengaluru’s popular Art Festival is back with its 8th Edition
At UB City from 02 – 18 November 2018
The media preview today of ‘Art Bengaluru’ offered glimpses into a well curated art exhibition, which brings together 17 Indian artists across 24 exhibits. With its inception in 2011, ‘Art Bengaluru’, the city’s first 10-day art festival was launched with the aim of celebrating art in its various forms. The idea behind it was to bring a multitude of artists and artforms from across India and the world under one roof, thus promoting art awareness as well as a deeper understanding of the arts. The 2014 edition featured artist Liu Bolin from China, popularly known as the 'The Invisible Man', and during the inaugural evening of Art Bengaluru, he performed and ‘disappeared’ into a bookshelf, even as the people watched (read about it here).
Over the years, the art festival has grown from strength to strength and has gravitated towards more serious art and artists. The exhibition this year includes artists Balan Nambiar, Gurudas Shenoy, Kavita Jaiswal, Vipta Kapadia, Parvathi Nayar, Pallon Daruwala, Romicon Revola & Saju Kunhan amongst others.
Large stainless steel sculptures by Balan Nambiar at the entrance create a striking visual. The rest of the exhibits are distributed across  floors, Gurudas Shenoy's paintings are on display on the ground floor and at Sublime Galleria. Overall, the display is cohesive and  follows distinct narratives on each floor - abstracts around natural and urban landscapes, ephemeral abstractions, architectural renderings in the form of assemblages, digital recreations of mid-nineteenth century  postcards and photographs that re-orient perspectives are some of the works that you should watch out for.
The art festival offers a great opportunity to visitors and shoppers to engage with art in a public space, and for its entire duration, anyone can walk into the premises and view  a diverse spectrum of mediums and styles, displayed with museum-class display infrastructure under one roof.
According to Uzma Irfan, Conceptualizer / Organiser, Art Bengaluru & Director, Prestige Group, "The language of art, as expressed through sounds, colours, shapes, lines, and images, speaks in ways that words cannot. Whether you experience the arts as a creator / artist or as an art lover, you can gain great pleasure and enjoyment from all kinds of art.” 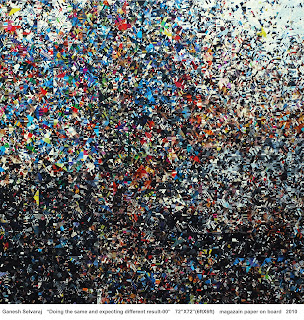 With curated art walks, the festival also aims to contribute to art education among both children and adults. Art Bengaluru 2018 has partnered with several schools (Parikrma Centre of Learning, Srishti Institute of Art, Design & Technology and Dr. Beltran’s Animation School, to name a few) to take their students through curated walks to help them better understand and appreciate the arts.  Abhishek Naidu, Curator, Art Bengaluru 2018 offers, “Art Bengaluru’s aim has always been to aid in the Bangalorean front of that fight by bringing a selection of works from a diverse set of artists to UB City, thus bringing a much-needed injection of art to the city, along with a wonderfully disarming onslaught of emotion, insight, perspective and reflection that is unique to an enriching art experience.”
Art Bengaluru 2018 will start on 2nd Nov with an evening that will also include musical performances by Aman Mahajan (Pianist), Nush Lewis (Harpist), Raman Iyer (Saxophonist), and The Flying Drummers.
Edit: Updated 02 – 18 November 2018
Please share this article using the social media widgets at the bottom and do subscribe to receive regular updates from Art Scene India.

Looking for balance and harmony in nature


Terra Firma presents recent works by four leading artists of Karnataka - Milind Nayak, Gurudas Shenoy, Shirley Mathew and Praveen Kumar at the Habitat Centre, New Delhi. Their works relate to the existing urban scenario and reflect on issues related to humanity and its co-existence with nature. All four artists are proficient at expressing structural and natural forms, in various medium and distinctive colour palettes. Their paintings evoke poignancy and deep contemplation as they explore the urban landscape with all its inherent beauty and conflicts.


Ganesha, symbolic of new beginnings, success, wisdom and generosity is worshipped on Ganesh Chaturthi, a Hindu festival that reveres the elephant God. The ten-day festival is celebrated starting on the fourth day of the Hindu luni-solar calendar month Bhadrapada, which typically falls in the months of August or September.

The festival is marked with installation of Ganesha clay idols in homes, or in public spaces on elaborate pandals. It ends on the tenth day after start, wherein the idol is carried in a public procession with music and group chanting, then immersed in a nearby water body such as a river or ocean, thereafter the clay idol dissolves and Ganesha is believed to return to Mount Kailasha to Parvati and Shiva (source - Wikipedia)

With greater environmental awareness, there is an emphasis on eco-friendly materials  to minimise pollution of water bodies.

As the festival marks Ganesha's birthday, and celebrates him as the god of good beginnings, prosperity and obstacle remover, he is worshipped across the country with equal fervour during festivals, rituals and other celebrations.

Ganesha, one of the most popular deities in India is symbolic of new beginnings, success, wisdom, generosity and is perceived as a destroyer of evils and obstacles. In Indian tradition, Ganesha is worshipped across the country with equal fervour during festivals, rituals and other celebrations.

His multiple forms have been visualized, interpreted and portrayed in thousands of artistic representations. A constant source of inspiration, here are a few beautiful images from artists, which I would like to share with you.

And, finally, a watercolour by Samir Mondal.


I love to hear from you, tell me which ones are your favourite? If you are an artist, please share your image in the comments below.


Have a question? You can either comment here or send me an email at nalini.indianart@gmail.com
If you enjoyed looking at these beautiful images, do share the post using the social media widgets at the top and subscribe to receive regular updates from Art Scene India